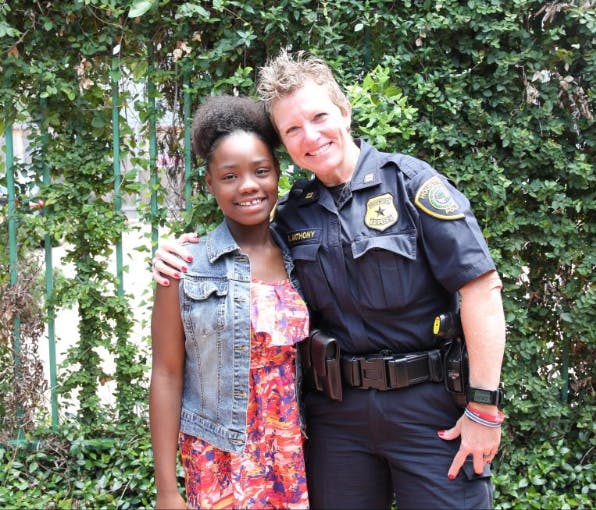 “I didn’t want the fact that I am a lesbian, older police officer to be an issue for my Little to accept me and who I am.” – Big Sister Kristine.

When applying to become a part of the Bigs in Blue initiative at Big Brothers Big Sisters, Kristine was apprehensive and fearful of not being accepted for who she truly was. Walking into her match introduction in December 2017, the nerves started to flow and her mind became filled with the endless questions of doubt and concern. Then she saw her new Little Sister, Terrell, dressed almost identical in plaid, denim, and boots. Immediately she was at ease, assured they would have at least one thing in common.

Kristine was right. These two had apparent similarities from the very beginning. They share all of the same favorite things including seafood, trying new things, their fashion choices and a love for spa days. Even after the reassurance that came with their first introduction, Kristine had no idea the amount of acceptance, love and devotion she would receive from her new Little Sister. Seven months later, Kristine admitted that she doesn’t know what life would be like without Terrell.

At their introduction, Terrell told her Big, “You can be yourself with me, so that I can be myself with you.” Coming from a world where Kristine felt a lack of acceptance, this led them to form an immediate bond. Kristine was able to open up to her Little in a way that she never had with someone before, staying true to herself when sharing life experiences and advice.

Terrell showed Kristine that she wanted to truly be a part of her family, extending her acceptance and embracing Kristine’s partner, Kristy. In May of 2018, when arriving to hang out with her Big, Terrell greeted Kristine and Kristy with a bag of presents and a journal saying, “I have a BIG question…” As soon as Kristy opened the journal, Terrell asked if Kristine and Kristy would be her Big Couple.

“If it wasn’t for Terrell, I would not feel as much acceptance and respect. We would not have the love of a very special person who accepts [Kristy and I] for just being us,” Kristine shared.

Since that special night, these three Sisters have developed a special bond. Over the course of the summer, when Kristine had a busy training schedule for the Houston Police Department traveling a lot, they mailed Terrell postcards and care packages with college t-shirts from various places they visited to show they did not forget about their Little Sister back home.

Terrell also loves to share the tremendous impact that her sister has made on her life. “Since the very beginning she would protect me no matter what happens. She makes me feel like I can do anything and everything,” Terrell affirmed.

This Big Couple has met a sister that they will have forever! Terrell adds, “When [Kristine and Kristy] came into my life, I knew it was a bond that could not be broken.”